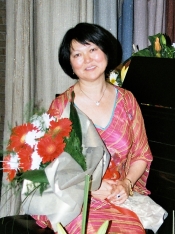 Principal of the Russian Lyceum

Shara Karsakpaeva was born in Kazakhstan.

She graduated in GITIS "A.V. Lunacharski" in Moscow," ballet director "qualified" teacher-choreographer.  Creative activity is starting as a student in Moscow Academic Choreography School in “Bolshoy theater “ and continues as a soloist at the State Academic Theatre "Abai" in Alma-Ata, where she performed leading solo parts in the performances "Giselle," "Swan Lake", "Silfida" 'Shopeniana "," Pahita "," Bayaderka "," Sleeping Beauty "and others.

Shara Karsakpaeva has a long and rich pedagogical activity. She has taught at the State Choreographic School "A. Seleznyov "in Alma-Ata, then worked as a teacher-tutor in Russian-English Ballet" Meneks "in Moscow.

From 1990 she worked as a teacher of classical dance at the State Choreographic School (now the National School of Dance) in Sofia, Bulgaria.

She has taught classical dance at the State Music Academy, National Academy for Theatre and Film Arts, New Bulgarian University, secondary schools of Russian Embassy in Sofia, Lycee Francaise "Victor Hugo" and Anglo-American College in Sofia. She was a leading trainer in private ballet school "Mika quilt" in Greece. Leader of a seminar on classical ballet heritage by UNESCO.
In 1999 she founded the Russian Ballet School - Sofia, and in 2004 opened Private School for Dance "Galina Ulanova" with specialty "classical dance" and from 2007 - "modern dance".

In 2009 she opened Private Kindergarten and Private Secondary school, teaching in Russian and English. That same year, the four institutions combine their creative activities in one educational and cultural complex-Russian Lyceum - Sofia, whose director becomes Shara Karsakpaeva .

The soloists  and ensembles prepared by her are participating in several national and international competitions, are winners of many prestigious awards.

Shara Karsakpaeva participates actively in society. Chairman of the Board of League of Kazakhstan in Bulgaria 'Aruah "from 2005, member of the management of the Forum of Russian compatriots", member of Russian Club "Soglasie".

For his active teaching, creative and social activities Shara Karsakpaeva has won many awards:

Gratitude of the President of the Federation Council of Russia (2006)

Honorary Diploma of the Minister of Culture of Russia (2009)

Medal "Pushkin" (Decree of the President of Russia Dmitry Medvedev on May 15, 2010)

1973 - entered National Ballet School in the town Perm in Russia.

1989.-1999. She worked as a teacher-tutor in the theater. And entered the Perm Institute of Culture, Faculty- choreography, specialty - teacher-tutor. 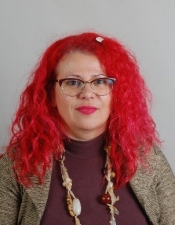